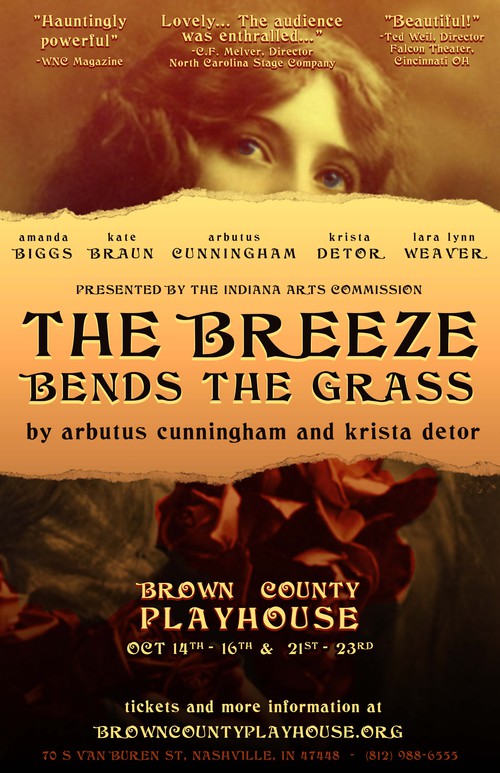 THE BREEZE BENDS THE GRASS SYNOPSIS

"The performances in The Breeze Bends the Grass are hauntingly powerful, and the women they portray will speak to the soul of every person who has ever been determined to live who they really are." - WNC Magazine

Funded by the Indiana Arts Commission's Individual Artist Grant, and sponsored by Women's Way, Tightrope Productions presents this narrative musical event that aims to bring to light the lives and struggles of women artists amidst the Arts & Crafts movement of the early 20th century. The subjects are: Painter Marie Goth; Metal Artist Janet Payne Bowles; Landscape artist Selma Steele; and Ceramacists, The Overbeck Sisters. Biographical info on the artists themselves, as well as the cast members can be found at www.facebook.com/thebreezebendsthegrass 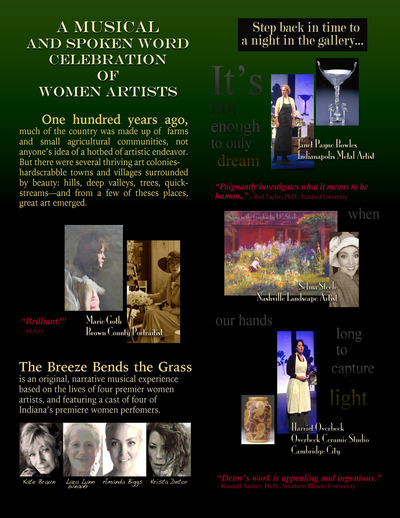 The stage is minimally set with only a single constructed set piece - a ‘baby grand piano’ - and four stools. Estimated stage set time is 1 hour. The characters are portrayed by a cast of four women, all of whom act and/or sing, and who individually come from widely varied performance background. All wear period dress, circa 1910-15, their hair worn in the color and style of the time. The debut in Brown County, Indiana, included pre-show and transition music by Cincinnati's Bluegrass Still and the classical/Celtic guitar/cello duo Krause&Hurley, and the show could easily incorporate a local period/character band at every stop for pre-show music.

The performances are powerful, the subject matter intriguing – both historically and emotionally - and in the end, your glimpse into a time long-past may very well alter your view of the time in which you live: Maybe you take note of the light in the last moments of dusk.. maybe you name the hue of a rooftop.. maybe, unexpectedly, you see it – the way the breeze bends the grass.
__________________________________________________________________________________________________
“The Breeze Bends the Grass is a beautiful portrait of several successful women artists set at a time when public success for a woman was incredibly challenging.  The play is built on the strength of character of these remarkable women and told through both word and song in a way that is both theatrical and artistic.  Simple staging makes this easily producible in any small space and the intimacy achieved between the remarkable singer/actresses and the audience is the true power of the work.”
- Ted Weil, Artistic Director, Falcon Theatre (Cincinnati, OH)

"The Breeze Bends The Grass is lovely! The performers capture the passion and reality of the lives of these amazing artists and their struggles through a male dominated society. The people around me in the audience were enthralled by the performances but mostly by the stories of these brave and talented women."
- Charles Flynn-McIver,  Artistic Director, North Carolina Stage Company (Asheville, NC)