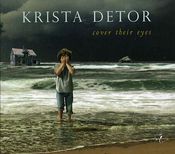 Intensive, daring.. marvelously poetic.. she has found her own strong and alive language... such music exists simply to be heard..” - Home of Rock, Germany "One of the Best Albums of 2007.." - RevolverWith her highly acclaimed album, Mudshow ('A Small Miracle..' Rolling Stone) Krista Detor was established as a gifted player on the world stage. Together with partner and producer, David Weber, shes since released the follow-up album, Cover Their Eyes ('One of the best albums of the year..' Revolver) continuing to push the edges of genre while remaining close throughout to the lyrical thread that defines her work.Shes reached #1 on the Euro-Americana chart and her musics been featured at the Cannes Film Festival, on NPR, PBS, the BBC, as well as countless U.S. and European National, Regional & Local radio shows. Shes appeared on both U.S. and European television and collaborated on the CD and Stage show Wilderness Plots, which has received rave reviews and will continue to tour throughout the U.S. well into the future. Recently, she was honored to be chosen to be a part of the Darwin Songhouse, with 7 other songwriters in Shrewsbury England, writing for 7 days songs to celebrate the 200th anniversary of the birth of Charles Darwin in his hometown. The event, subsequent concert and live CD release were covered extensively by the BBC.