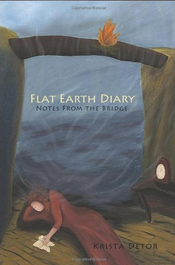 "Krista Detor's Flat Earth Diary: Notes from the Bridge is beautifully unlike any book I've ever read (which is a good few). I've been reading in snatches and deep draughts for the last couple years, and I think anybody interested in writing and rhetoric, especially multimodal composing, should pick up a copy: it's remarkable. Also, recommended for people who like books that are funny or sad or thought-provoking or wistful or insightful or warm or insouciant. Probably especially for people who like books that are insouciant. Comes with CD-ROM. Just kidding: no CD-ROM. But it does pair well with the album, Flat Earth Diary, whose making it re-composes."- Dr. Ira Allen, Associate Professor of Rhetoric and Composition, American University of Beirut